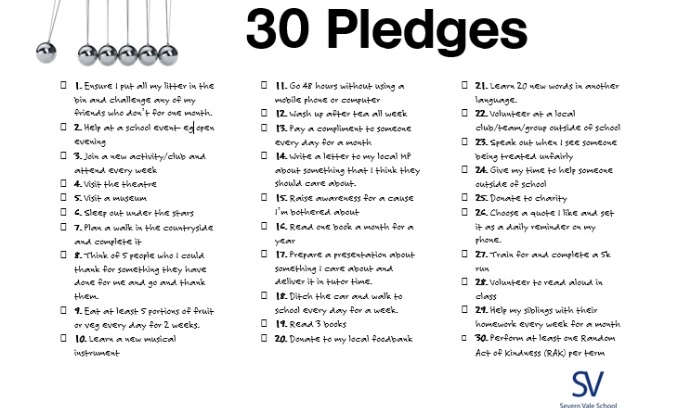 Last year we all coalesced around raising £5000 to build a school in Sierra Leone.  This year it’s pledges we’re after.

We’ve come up with a list of 30 pledges for students to sign up to.  The goal is for them to try and tick off as many as they can over the course of the year.  Pledges range from personal development activities such as visiting a museum or sleeping out under the stars to more altruistic things like helping out with the washing up or volunteering at a community group.  There’s even the challenge of going 48hrs without their mobile phone!

A special feature of the pledges is number 30; perform at least one random act of kindness (RAK) per term.  This is a challenge I’m hoping we’ll all embrace and one I know Parliament have some events lined up to champion throughout the year.  Simply put, this involves doing something nice for someone else without any incentive or motivation beyond being nice.  Most recently this was popularised by a guy called Luke Cameron from Gloucester.  He set himself the challenge of doing a RAK a day for a year, ranging from paying for a stranger’s  petrol through to giving compliments to those he met.  He recorded all of this in a blog. Check it out at http://thegooddeeddiary.com/

Each tutor has a wallchart on display in their tutor bases so students can tick off their achievements as they go.  There’s also a space on the right of the chart  to record any RAKs they do.  Good ones will get a mention in assembly and a tweet from School Parliament.

Imagine a school where everyone was doing good things for one another.  Imagine what it would feel like to do something nice for someone else every day.  Imagine the knock-on effects of all that niceness!

Now stop imagining and get out there and do it, one pledge at a time!