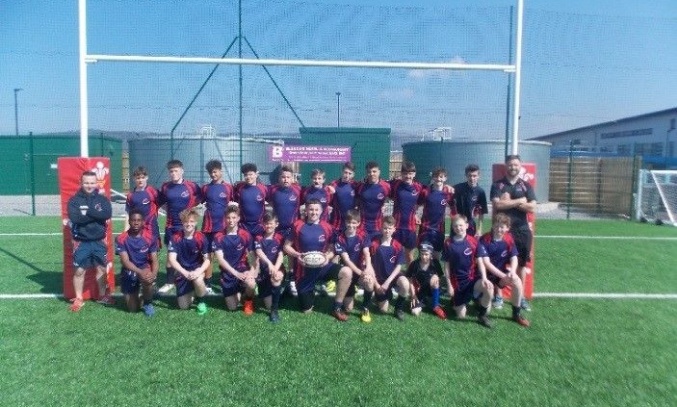 The last weekend of term 4 saw the first of what will hopefully be many Rugby Tours run by Severn Vale School. Twenty-one Year 9 students accompanied by three members of staff set of to sample the delights that South Wales, specifically the Swansea and Port Talbot areas had to offer. Mr Johnson and Miss Hammond came out to wave us off and wish us luck for the tour. As we were leaving, Mr Johnson reminded everyone about the need for a passport to cross the border, which was met with laughter from the students. However, as we approached the bridge one of the members of staff looked round to see a head missing. One of the boys was so worried as he had forgotten his passport that he had put his head down so the lady in the tollbooth couldn’t see him!

The first stop was to play Baglan Bay School. The school is in a brand new building that has been formed by amalgamating two secondary schools in the area. The facilities were amazing and for many of our students it was the first time they had played on a 3G pitch. The game itself was a game of two halves, with Severn Vale being very impressive in the first half and building a big lead but unfortunately in the second half Baglan got back into the game and scored late on, to win the game with a final score of 27-25 to Baglan. There were many highlights during the game and some excellent displays of rugby from both sides but the best comment of the game came from one student who was amazed that he had played rugby and not got muddy. After the game all the boys were invited into the canteen for presentations and some well-earned food. We then went to the hotel to check in before a game of 10-pin bowling and an evening meal.

Saturday, as the weather was phenomenal, saw everyone taking a trip to one of Swansea’s legendary beaches for some friendly touch rugby or a paddle. In the afternoon, it was up to the Liberty Stadium to watch the Ospreys and Leinster do battle in the PRO12. It was a close game with Leinster winning 20-18. We were lucky that we managed to secure silver package tickets for the game, which gave us tour of the stadium, a chance to meet former players and then be the guard of honour on the pitch as the players ran out for the second half. The evening saw a trip to Nines Global Buffet, which catered for every taste and for some was the highlight of their weekend.

Sunday saw the second and final game of tour at Morriston Rugby Club. Morriston have many teams all the way through the age groups and we came up against a very strong U14s team, who shortly after our game went on to win a Leicester Tigers invitational tournament. This game saw Severn Vale’s biggest crowd of the weekend with both Mr Johnson and Miss Hammond, their partners and a small number of parents cheering us on from the side lines. The first half was an even contest with Severn Vale going in at half-time with a 7-5 lead following a try from the captain, Fred Nicholson. The second half proved much harder. At half-time they brought on a winger who resembled the late Jonah Lomu, in his prime galloping down the wing and scoring a number of tries. The final score was 36-7 to Morriston. After the game it was into the clubhouse for presentations and some food before returning to school for the Easter Holidays to begin.